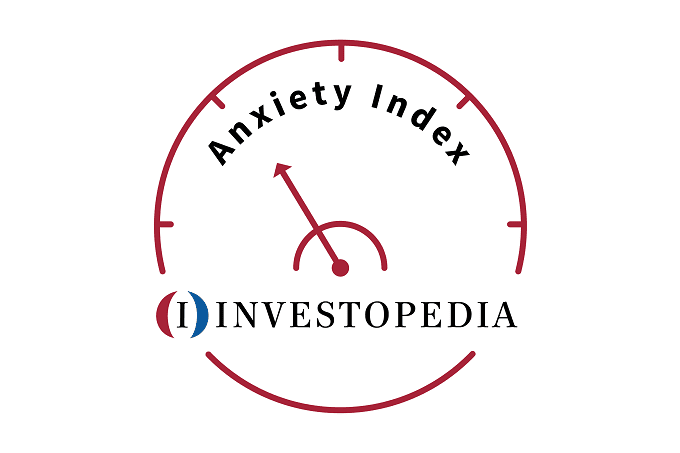 The current reading of the Investopedia Anxiety Index is above neutral, indicating a higher level of anxiety.

Rising inflation has fueled concerns the Federal Reserve will take a more aggressive stance to combat higher prices by hiking interest rates and reducing its balance sheet. Federal funds futures now show an 85% probability the Fed will raise rates by half a percentage point, up from 78% last week, according to CME Group.

The yield on the 10-year Treasury note rose above 2.8% for the first time in three years. Yesterday, stocks fell as rising bond yields weighed on growth stocks. Investors started the holiday-shortened week with all three major indexes in the red, led by a technology sell-off. The Dow fell 1.2%, the S&P 500 lost 0.7%, and the Nasdaq sank 2.2%.

Oil prices rose as fears of a downturn in demand eased after China eased lockdown restrictions. OPEC also warned it would be impossible to increase output enough to offset lost supply of Russian oil. Light sweet crude was up over 3% to $97 a barrel.

The price of Bitcoin moved back above $40,000 after falling below that level yesterday. The price of Ether was up above $3,000.

What the Index Shows

The Investopedia Anxiety Index (IAI) is a gauge of investor sentiment based on the behavior of tens of millions of Investopedia readers around the world. A reading of 100 is considered “neutral.”

The IAI is driven by reader interest on Investopedia across three categories of topics: macroeconomic (such as inflation and deflation), negative market sentiment (such as short selling and volatility), and debt/credit (such as default, solvency, and bankruptcy).

Background on the Index

In 2012, Seth Steven-Davidowitz published an article in The New York Times explaining how he used Google search results to uncover voter bias that pollsters were unable to find. As of March 2022, Investopedia has over 44 million monthly unique visitors, and with Steven-Davidowitz’s work in mind, we asked ourselves, “What can the search behavior of our readers tell us about the state of markets and the economy?”

We have the data: more than 30,000 URLs of quality content going back before the collapse of Lehman Brothers and the 2008 financial crisis. I represented the editorial team and partnered with our lead data scientist Dr. Ronnie Jansson at the end of 2015 to search for patterns in our most highly trafficked materials. We carefully selected a selection of terms on topics that suggested investor fear, like “default,” and opportunistic terms, like “short-selling.”

Finding a signal in noisy web traffic data is difficult due the varied seasonality of our readership (for instance, traffic declines on the weekends) and exogenous factors like search engine results page (SERP) rank. We first needed to develop a methodology to remove this noise and produce an index that robustly tracks the actual ebb and flow of interest in the chosen topics.

When we looked at the results of the analysis the first time, we found that the major peaks in the index occurred exactly where they would make sense: around major events like the fall of Lehman Brothers (by far the most significant peak), the Greek debt crisis, and the U.S. credit downgrade by Standard and Poor’s.

In the final version of the IAI we used 12 definition pages, all with exceptionally high page view counts. We also now use several thousand more pages in the normalization procedure. In total we used close to one billion page views to produce the 10+ year monthly IAI plot.

We had set out to create a proxy or index for investor sentiment, but we needed an outside point of reference. The Chicago Board of Options Exchange’s Volatility Index (VIX), often referred to as “the fear index,” is commonly used as a gauge of investor fear. We plotted the VIX next to our new creation, and the results spoke for themselves:

Over a period of almost a decade, the large scale features are very similar in the VIX and the IAI despite measuring different phenomena (stock market volatility and content consumption, respectively). It gets even more interesting when the two are overlaid on top of one another:

Perhaps the most compelling comparison is at the very earliest point of the plot. For more than a year prior to the peak of the financial crisis in September 2008, the IAI was profoundly elevated (around 120 or so – a level that had not occurred in a single month in the most recent four years), while the VIX remained subdued, around 20. In other words, based on the VIX alone you would be caught completely off guard by the biggest financial crisis of our generation, whereas the IAI was an alarm blaring for more than a year before the crisis hit.