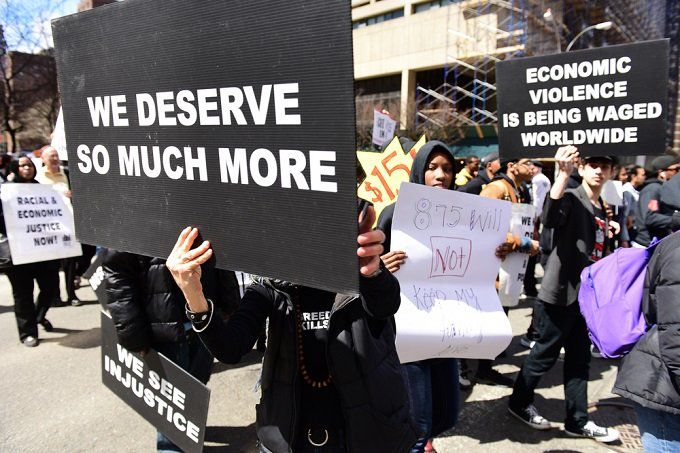 Economic inequality is easy enough to find statistics on, but these are often difficult to parse. For example, politician Bernie Sanders, a vocal campaigner for equality, has provided various data points over the years to get his message across. Sanders has claimed at rallies, on his campaign website, and elsewhere at various points in time that: the top 1% of the population takes in 23.5% of all of the nation’s income; the top 0.1% of the population controls roughly as much wealth as the bottom 90%; the top 1% accounted for 58% of real income growth from 2009 to 2014, with 42% going to the bottom 99%; and that the U.S. has the highest child poverty rate among developed countries.

These numbers hop around between the 0.1%, the 1%, and the 90%, and between wealth, income, income growth, and poverty rates. Not all of these variables are necessarily correlated: An American lawyer with student debt might make several hundred times what a Kenyan herder does, but have much lower net wealth. For the purposes of campaigning, this style of presentation is fine; the picture of pervasive unfairness emerges clearly enough. For purposes of comparison across time and space, however, we need a nice, clean headline number.

Of course, any single data point will distort the picture, leaving this out, overemphasizing that, and giving the dangerous impression that life is simpler than it is. So we need to pick the best metric possible.

‘Putting the Gini Back in the Bottle’

For years, the number used to measure inequality has been the Gini coefficient. It’s not hard to see why, given its alluring simplicity: 0 denotes perfect equality, in which everyone’s income—or occasionally, wealth—is the same; 1 denotes perfect inequality, in which a single individual makes all the income (figures above 1 could theoretically result if some people make negative incomes).

The Gini coefficient gives us a single sliding scale to measure income inequality, but what does it actually mean? The answer is off-puttingly complex.

If you plot population percentiles by income on the horizontal axis against cumulative income on the vertical axis, you get something called the Lorenz curve. In the examples below, we can see that the 54th percentile corresponded to 13.98% of total income in Haiti and 22.53% in Bolivia. In other words, the bottom 54% of the population took in around 14% of Haiti’s income and around 23% of Bolivia’s. The straight-line states the obvious: in a perfectly equal society, the bottom 54% would take in 54% of the total income.

Take one of these curves, calculate the area beneath it, divide the result by the area beneath the straight line denoting perfect equality, and you have your Gini coefficient—none of which is very intuitive.

Nor is that the only problem with the Gini coefficient. Take a hypothetical society in which the top 10% of the population earns 25% of the total income, and so does the bottom 40%. You get a Gini coefficient of 0.225.

To economists Alex Cobham (chief executive of the U.K’s Tax Justice Network) and Andy Sumner (professor of international development at King’s College London and director of the Economic and Social Research Council (ESRC) Global Challenges Strategic Research Network on Global Poverty and Inequality Dynamics), the Gini just doesn’t make much sense. When the bottom 40% of a population lose half their income, and the richest 10% get dibs, a sensible measure of income inequality should rise more than incrementally.

In 2013, Cobham and Sumner proposed an alternative to the Gini coefficient: the Palma ratio. They named it after José Gabriel Palma, a Chilean economist. Palma noticed that in most countries, the middle class—defined as those in the fifth to ninth income deciles, or the 40%-90%—take in around half of the total income.

“The (relative) stability of the income share of the middle is a strikingly consistent finding, for different data sets, countries and time periods.,” Cobham told Investopedia by email. Given that insight, there seems to be little sense in using the Gini ratio, which is sensitive to changes at the middle of the income spectrum but relatively blind to shifts at the extremes.

The Palma ratio divides the income share of the top 10% by that of the bottom 40%. The result is a metric that is, in Cobham and Sumner’s words, “‘over’-sensitive to changes in the distribution at the extremes, rather than in the relatively inert middle.” The table below, from which the hypothetical Gini coefficients above are taken, shows how this effect plays out:

The near-halving of the bottom 40%’s income—and resulting boost to the income of the richest 10% —causes the Palma ratio to shoot up from 5 to 10, whereas the Gini coefficient ticks up only slightly.

The Palma ratio has another advantage: its real-world meaning is easy to grasp. It is not the product of statistical wizardry, but simple division: the highest-earning 10% of the population make X times more than the lowest-earning 40%. The Gini ratio, Cobham and Sumner write, “yields no intuitive statement for a non-technical audience.” The best we can do is something like: on a scale of 0 to 1, this country is 0.X unequal.

How Is the Palma Ratio Calculated?

The Palma ratio is calculated by dividing the richest 10% of the population’s share of gross national income (GNI) by the poorest 40%’s share.

Why Is the Palma Ratio Considered Better Than the Gini?

The richest getting richer and the poorest getting poorer is the main driver of inequality. The Gini, however, is more sensitive to changes in the middle group, which is where shifts in income less frequently occur. The Palma was developed to remedy this issue by focusing on the differences between those in the top and bottom income brackets.

What Does a High Palma Ratio Mean?

The higher the Palma ratio, the greater the inequality.

So, should we expect the Palma ratio to put “the Gini back in the bottle,” as Cobham and Sumner’s paper put it? Perhaps in time. As Cobham lamented to Investopedia, “Ah, the tyranny of the Gini remains strong!”

Still, it didn’t take long for the Palma ratio to attract some big endorsers. The Organisation for Economic Co-operation and Development (OECD) and the United Nations (UN) included it in their databases and the Nobel prize-winning economist Joseph Stiglitz used it as the basis of a proposal for the Sustainable Development Goals.